There are bikes like Honda, Yamaha, Suzuki and a whole lot of other manufacturers and then there is Royal Enfield Bullet.

Royal Enfield has become one of the most revered motorcycles of the nation and for most people, it isn’t just a matter of riding a metal machine but a symbol of attaining maturity and flaunting machismo.

The feeling that you get while riding a Royal Enfield Bullet combined with that typical thump and brilliant torque is simply indescribable.

The sound it makes and the way it starts and runs, it makes you feel like you are riding a powerful machine.

The one thing why Bullet stands out from the rest is its thumping sound that comes out of the exhaust.

remember those old Bullets in the which ruled the Indian streets with their heavy bassy exhaust sound?

Did you ever wonder why the new Enfield silencers are making much less exhaust sound compared to the oldies?

Let me tell you, due to some regulations of the Indian Government, new Royal Enfield stock silencers are manufactured in such a way that the exhaust sound and expelled gases are minimised to control sound and air pollution.

Because of this, new RE motorcycles are less noisy and gives out the best fuel efficiency, but they are not much ‘powerful’ than the old Bullets in terms of performance.

Most of the new gen Enfield riders thus change their exhausts to an aftermarket silencer to get a better sound or performance.

I assume since you are reading this, you are planning to replace your Royal Enfield’s exhaust and looking for the best silencer for your machine.

Believe it or not, choosing the best bullet silencer is tougher than you think, as picking the wrong one can harm your motorcycle badly.

You have a lot of brands to choose from, but most of them are manufactured unscientifically and using them will definitely affect your engine’s performance and reliability.

That’s why we have compiled a list of the best silencers for Royal Enfield including an ultimate buying guide which clarifies most of your doubts and common misconceptions about changing exhausts.

So, without further ado, here we go!

NOTE: If your RE is brand new, it is better to not replace your exhaust before running at least 3000 KM on stock exhaust.

Is it legal/illegal to replace Royal Enfield Exhausts?

Legally, if you make any modifications to your vehicle, you have to get approval from RTO for using it in the streets. So, any after market exhaust modification is considered to be illegal if you don’t have approval from the RTO.

As the name implies, one of the major purposes of a silencer/exhaust is silencing the engine exhaust sound.

The silencers have pathways specifically designed to minimize the sound coming from the exhaust.

Hot gases are released out from internal combustion engine on each blast and these gases have to be absorbed and the noise should be reduced. 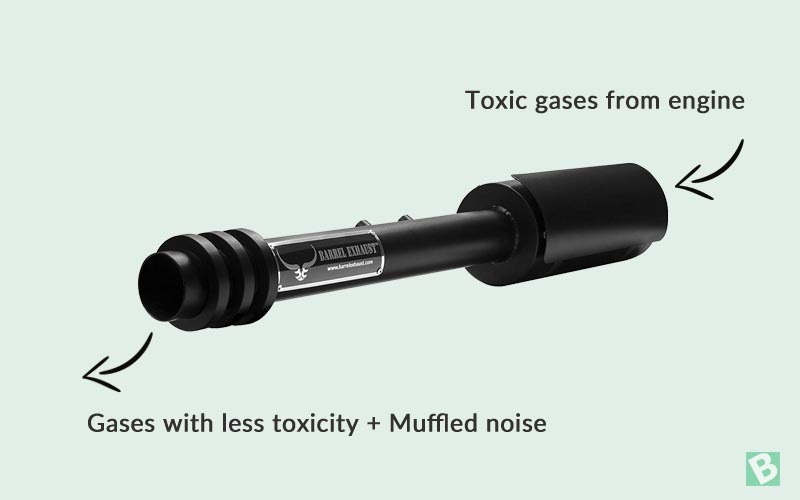 The real purpose of a good exhaust system is to expel out these gases while maintaining the power and performance of the vehicle.

Sometimes mufflers (silencers) also happens to have a catalytic converter which can reduce the emission of certain pollutants that come with the exhaust gases out of the engine.

The catalytic converter is a vessel in the exhaust system containing catalysts like Platinum, Palladium, and Rhodium. 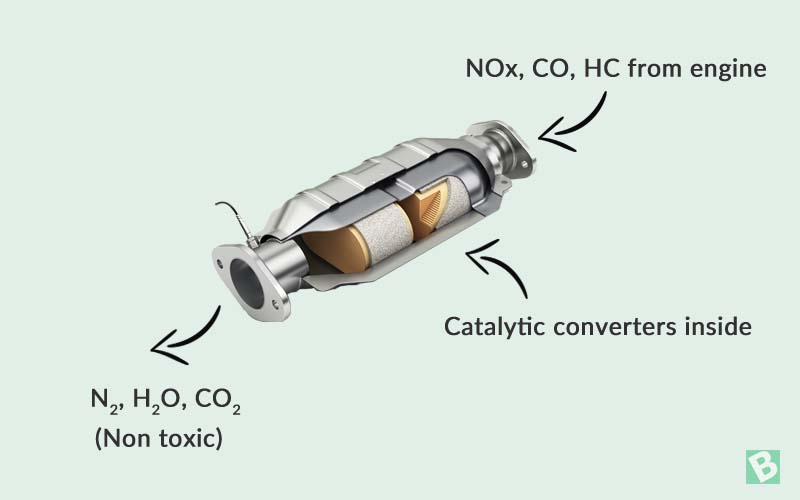 Platinum and Palladium convert harmful exhaust gases by further oxidation of Carbon Monoxide and unburned Hydrocarbons into Water and Carbon Dioxide, and Rhodium breaks the toxic Nitrogen Oxides into non-toxic Nitrogen and Oxygen.

The most misunderstood and one of the most important factors about the Royal Enfield silencers is the back pressure, which affects the power delivery of the engine to a large extent.

Back pressure refers to the pressure opposed to the desired flow of gases in a confined place such as a pipe.

It is created with the help of obstructions in the exhaust system using mufflers, barriers or shape of the silencer to maintain an optimum pressure level of the exhaust gases for optimum power delivery throughout all the RPM ranges.

A certain level of backpressure is important for every engine and Royal Enfield stock silencers meet this requirement perfectly because the company has scientifically designed them for their own engines.

However, a small amount of back pressure is crucial for optimal engine performance.

Back pressure in the exhaust system pushes any unburned intake back into the engine.

Without this sufficient back pressure, some intake is lost, leading to higher fuel consumption.

When it comes to the aftermarket exhausts, the amount of back pressure is different on various silencers.

Most of the silencers from unknown brands don’t provide sufficient amount of back pressure to the engine.

So, if you are replacing your RE’s stock silencer with an exhaust which doesn’t provide enough back pressure, it will definitely affect the performance of the machine in the long run.

Most third party bullet silencers have drastically reduced back pressure levels to increase pick up and create a more bassy scavenging effect.

Because of this, motorcycles fitted with these exhausts tend to have a reduced top speed, slow acceleration at high RPM and dismal performance when going uphill.

On top of this, this type of exhausts creates a high decibel noise that can even damage the rider’s ears.

Hence, you need to have an exhaust with sufficient amount of backpressure depending upon the kind of machine you are using in order to achieve better performance and more mileage.

Changing Silencers and their Effect on Engine

The Enfield owners are often concerned about changing the stock exhaust due to the fear of affecting the engine in any harmful way.

During our research for finding the best bullet silencers, we have seen a lot of people inquiring about the same, everywhere on the Internet.

Let me tell you the real truth behind this.

Believe me, changing your stock exhaust to an aftermarket unit is safe most of the times, but if the exhaust system is designed so badly, there are chances that the engine could be affected.

There are a lot of silencers out there in the market with prices starting from Rs.1000 to even Rs.15000, and many of them are not up to the mark in terms of quality and performance.

But, if you are purchasing from reputed brands like Barrel Exhaust, Greasehouse, Red Rooster, Moto Torque, Swagman etc you can be assured of the performance and durability you desire.

Mileage after Changing the Silencer

With regards to mileage, it can both increase or decrease, but it depends on a lot of other complicated factors also.

Though mileage depends on the type of exhaust you use, the actual fuel consumption directly depends on working conditions of the engine.

If the engine is well tuned according to the new exhaust, it will give out the best fuel economy for sure.

More than these, fuel efficiency also depends on how you ride the bike.

Aftermarket exhausts free the engine up a bit, so it produces a little more torque and power.

Whenever you ride your motorcycle without revving on the throttle, the engine runs at a lower RPM than before and thus will get a slightly better mileage.

On the contrary, the new exhaust will make your Enfield sound beefier, and this could motivate you to ride faster.

If that’s the case, then the mileage will plummet for sure.

Before discussing the types of Royal Enfield exhausts, let’s understand a little about the design and working of an exhaust system. 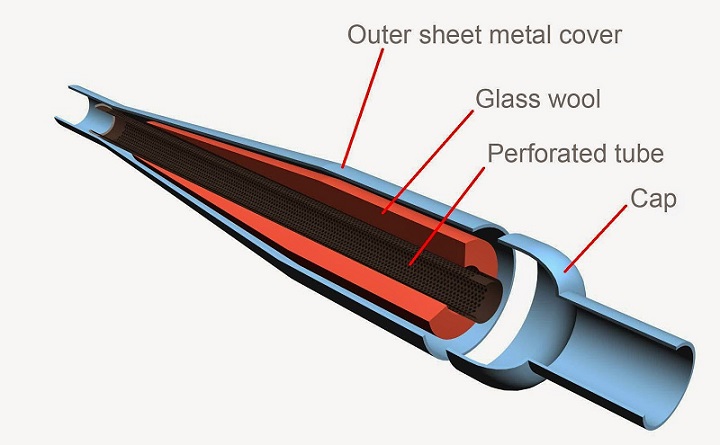 An exhaust pipe has an outer sheet metal cover which protects the silencer and inside it, there is a perforated tube through which exhaust gases pass out.

Some silencers have a packing material wrapped around the perforated tube which absorbs unnecessary noises and gives out a bassy sound.

The packing material also acts as a thermal insulator and it absorbs a specific amount of heat from the expelled gas.

Glass wool and ceramic wool are the two types of packing materials commonly used in silencers.

They are a type of man-made fibres with high thermal insulation and low thermal conductivity.

Strategic placement of these packing materials around the perforation tube gives a different thumb and bass for the exhaust sound.

Mainly, there are three types of Royal Enfield exhausts out there.

Free flow silencers are made by creating minimum obstructions inside the silencer and thus it provides an easy path for the exhaust gases to flow.

Here, the sufficient backpressure is created inside the silencer by making some modifications in the design of the exhaust pipe or with the help of baffles.

Compared to glass wool and ceramic wool exhausts, free flow silencers has a lesser backpressure and thus they have a high scavenging effect.

In Glass wool silencers the material packed inside the exhaust are either glass, silica or sand.

Glass wool is an insulating material made from fibres of glass arranged using a binder into a texture similar to wool.

It traps many small pockets of air between the glass, and these small air pockets result in high thermal insulation properties.

Compared to ceramic wool, glass wool has a tendency to deteriorates over time and might need replacement in the long run.

The price range of Royal Enfield’s glass wool silencers starts from Rs.2000 to Rs.3000 in India.

Ceramic wool is another type of packing material used in the Enfield silencers.

These are more durable than glass wool and it has a higher thermal insulation capacity.

Because of this, these silencers doesn’t get too hot even after a long ride.

Please note that some Glass Wool and Ceramic Wool exhausts are considered as Free Flow silencers as well.

These are some commonly available Royal Enfield exhausts categorised based on sound and design.

Gives slow strong and long strokes. Bass is heavy and strong treble is recessed. These are very long and protrudes out of chassis.

The sound is similar to Original Cast Iron beats, it’s very pleasant and balanced tune, very soothing for ears, not that much loud.

The silencer with a perfect balance of performance and bassy exhaust sound.

Emphasises especially on Bass. The bass is deep, heavy and thumpy. The sound seems artificial and hurts ears at higher RPMs.

Looks like a mouth of dolphin, large sound with high bass.

Has a very Techno- Bassy tune. The hearing sound seems very artificial and not very soothing for ears. Treble is boosted as well.

Looks tiny, but gives heavy beats, and has the deepest bass of all.

Loud, fast beats, emphasized on Bass, the sound is much more continuous without interval.